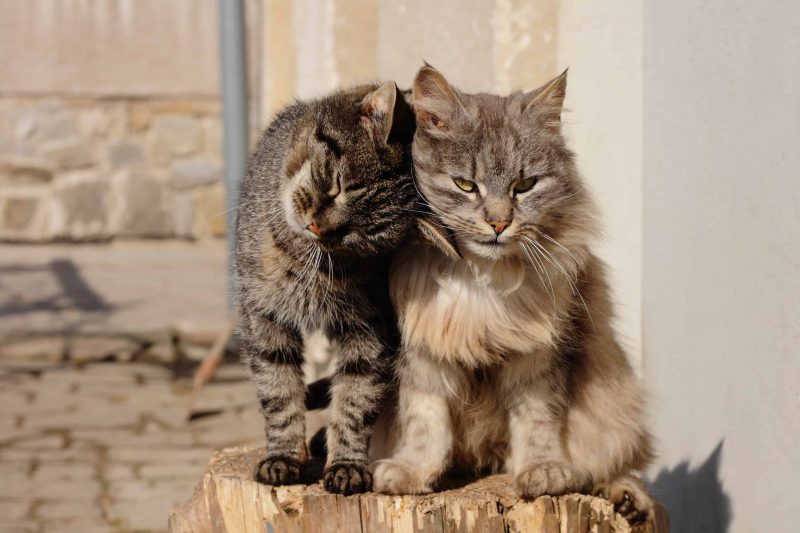 The Story of Peaches and Tigger

We got our first cat in December of 2014 – a 6-week-old female ginger tabby that we named Peaches. She grew up happily and settled into her role of running our lives. About 2 months ago, we decided to get a second cat. One of my coworkers, Rachel, found some abandoned kittens one day in October – you may have seen them on Facebook! We decided to take one and picked the male ginger tabby with white who was 8 weeks old; we named him Tigger.

The day that I brought him home, Peaches was immediately upset. I knew I would have to take some time to introduce them properly. So, Tigger got set up in the bathroom with a bed, a litterbox, water and his food and he was kept separate from Peaches. Peaches did not like this new addition – he made a lot of noise, and he was stealing attention away from her. During the first few days, they were not allowed out together – if Tigger was running around, Peaches was put in a room by herself. We also tried to give her as much positive attention as possible so she wouldn’t feel left out. We plugged in a Feliway diffuser near the bathroom to ease the tension with the pheromones. And we switched their beds every couple of days so they could both get used to each other’s scent. After about 5 days of them being in the same house but kept separate, we decided to let them officially meet.

Peaches was very curious at first and mostly thought he was a new toy – Tigger got smacked on the head a few times! They ran around together a little bit and then started wrestling. We let them duke it out for a few minutes, and then we separated them since Peaches was so much bigger, and we didn’t want her to hurt Tigger. This process continued for a few days while we let them get used to each other, and finally, we were able to let them out together without direct supervision. 3 weeks after Tigger came home, they are on their way to becoming best friends. They enjoy chasing each other around the apartment and having wrestling matches. Tigger has a lot of energy and a great personality, so it is a lot of fun to watch them. Due to Tigger’s age, he is not left out in the apartment when we are away or at night, but eventually, we hope to leave them out together all the time.

As Tigger is getting bigger, he can fend for himself more and is harassing Peaches a little too much with his energy. We are making sure that they each have safe access to their food and litterboxes and each gets quality time with us. Though our apartment is small, we are also trying to make sure that Peaches has a safe place to hide when she has had enough. We are also adding a Feliway Friends diffuser to reduce tension and help them get along better with each other.

There will always be cats that do better if they are the only cat, but if you plan to introduce a second cat, take the time to do it properly, and your cats may soon be best friends. This process was fairly easy since Tigger is a kitten – in general, kittens are less threatening and make the adjustment period much shorter. If I had been trying to introduce 2 adult cats, I would have lengthened the introduction process to at least 2 weeks. So, if you are thinking about adding a new cat to your household, make sure you do your research first and be prepared for it to take some time for the new cat to really settle in with the existing pets. And don’t hesitate to give us a call if you need some help!