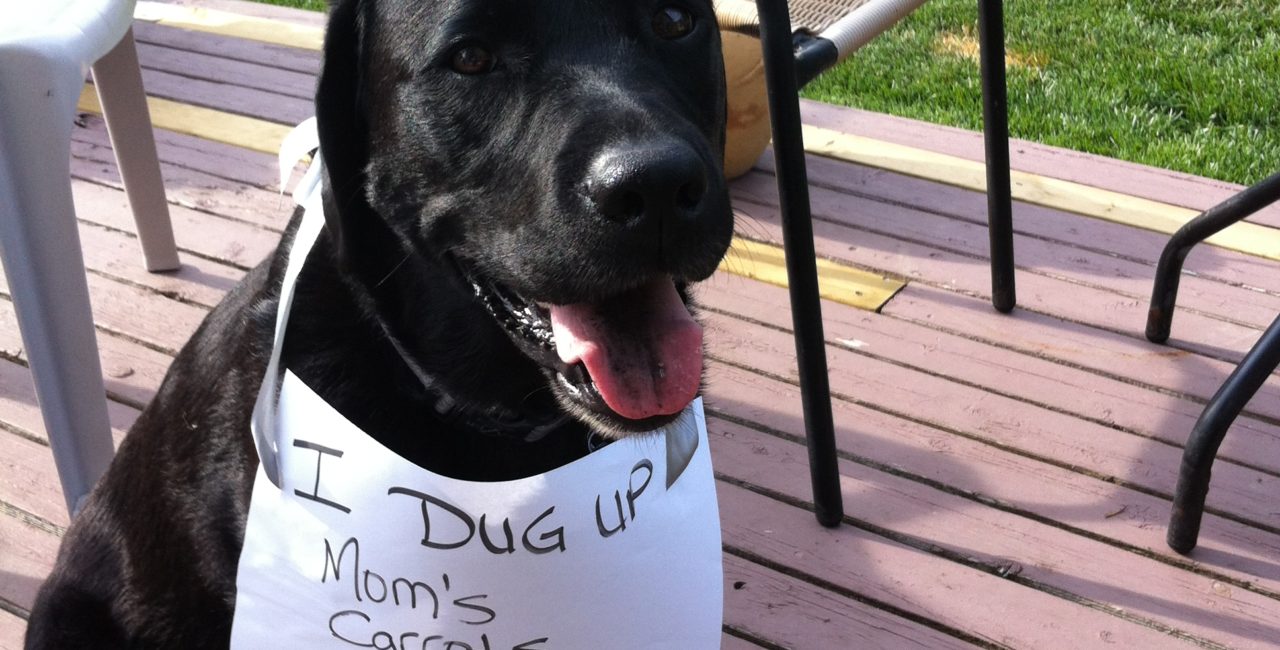 Why Adopt Another Dog? Why Not?!

It was a long hard year for our family. We had gone through a series of tragedies and stressful events that no family should have to experience in such a short period of time. The final event to hit us that year was the loss of our beloved yellow Lab “Charlie”. He had an unexpected short battle with illness and after 2 days he was gone. We felt a huge void in our lives when we lost him. That day I remember saying to myself the words that many others have spoken or thought, “No way can I go through this again…it hurts too much”.

A few months went by and I had myself convinced I had adjusted to life without a dog. After all we had 2 cats.  They were independent, we had the freedom to be out as long as we needed to be without the worry of rushing home to let the dog out. We had a busy life and having only cats was perfect for us.  I missed Charlie dearly; he was a wonderful companion and could never be replaced.

Then one day I received an e-mail that had been forwarded through a number of friends. When I opened it up it was an ad on Kijiji. 4 YEAR OLD BLACK LAB NEEDS A FOREVER HOME.  The ad said they needed to find a new home for her due to their baby having allergies. Only serious applications will be accepted.  I slept on it that night. Well not really, I didn’t sleep at all.

My 2 daughters had been trying to convince me for awhile that we needed to get a new puppy.  Despite their efforts I stood firm.  I loved puppies but I just didn’t think I could go through the puppy training again. But a 4 year old dog… maybe.  After all we had a house, a yard, I work in a vet clinic and most importantly we had lots of  love to give. How could I say no?

We called and made an appointment the next day to visit.

We introduced ourselves; spoke to her owner for a while before we met “Gerdie”.  Jeff was a social worker and his wife was a nurse.  They had “Gerdie” since she was a puppy and their love for her was evident. They were heartbroken when they discovered their baby was allergic to her. This was very difficult for them. Then we met “Gerdie”.  She was sectioned off to a smaller part of the house and her exuberance was astounding. Her whole hind end wagged along with her tail and she was so excited about life! We agreed to a trial sleepover to see how she got along with our cats.

She arrived 2 days later with all of her belongings, bowl, cage, toys, paperwork and food. They seemed convinced that this trial was going to work out.  I was still approaching it with reservation, was I really ready for this?

I was home with “Gerdie” for the weekend and was worried as I watched her chase the cats, steal shoes, and slobber water all over my floors every time she drank. Maybe I wasn’t as ready as I thought? The cats were hiding and my hopes of them adjusting were fading. My daughters on the other hand weren’t worried.  They were in love.

I remember the day things changed for me.  I was doing laundry and in deep thought about whether this trial was going to work.  I turned around and “Gerdie” was sitting there watching me ever so calmly as if she knew what I was thinking. The look on her face melted me.  All I could say was “Don’t worry, you aren’t going anywhere”. After a few more days it didn’t take long for her to learn to leave the cats alone. Now they are all very good friends!!

If I had just taken the advice I give at work everyday, “just give it time, there is always an adjustment period, and with patience and understanding a new pet can adjust into your life.” I would have had a few less sleepless nights if I had only heeded this advice.

Now “Gerdie” is a big part of our lives.  She still chases the cats occasionally, steals shoes and drools water all over the floor.  However the cats do their share of teasing, the shoes are never chewed but carried to random spots in the house, and I now purchase Swiffer”refills at Costco.  They work great for mopping up drooled water. More importantly Gerdie has become a huge part of our family.  She is always there to soak up a hug, accompany you on a long walk, bark at a possible intruder….and fill that void that only a dog can fill.  She hasn’t replaced Charlie of course but has started a new chapter in our lives.

We thought we were what she needed… turns out she was what we needed.

I look forward to sharing more “Gerdie stories with you such as  “Digging up Carrots”, “Never stop destuffing a stuffie until the stuffing is all gone”  “Destroy that toy until you find the squeaker”  and my favorite “I wonder what an SOS pad tastes like ? (Oops I swallowed it)”