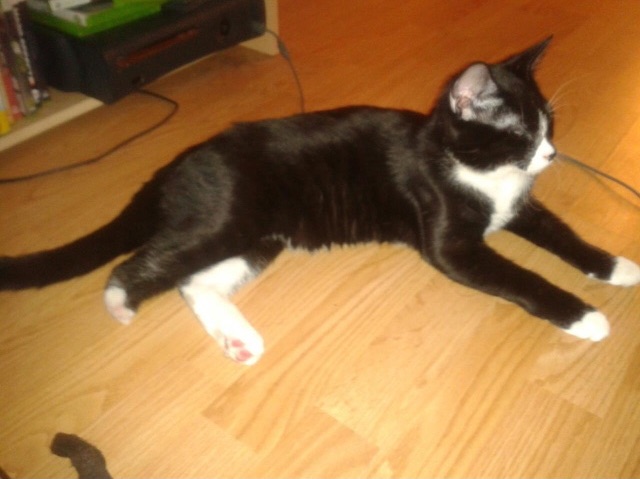 My name is Kandice and I work here at Mission Ridge Animal Hospital as an Animal Care Attendant. I live in St.Albert with my boyfriend Dana, our Lab/Dane cross Swayze, our ginger kitten Tibbers and our three legged cat named Claptrap.  I’d like to share the story of how Claptraps leg was amputated and how it affected him.

After deciding it was time to get Swayze a new kitty friend it was off to the EHS for us. We walked into the first cat room and Dana decided to sit in the middle and yell out “Impress me cats!”, as you can imagine none were too keen on getting up from their napping areas.  After the third room and third time Dana announced to the cats they had better get to impressing him, Claptrap (his name Matey at the time) ran right up to him and sat in his lap. When we decided that he was the one, I grabbed his information sheet and I noticed on his paper that Claptrap had a deformity. He was born without a back right foot and he used his right leg to balance. I had already fallen in love with him, so the thought of having to amputate his leg in the future was something I accepted. We adopted Matey and re named him Claptrap. Odd name yes but he was and still is a really odd cat!

When we got Claptrap home and he adjusted to his new surroundings and new pet siblings, we noticed he wasn’t a super friendly cat overall. He never seemed to want any affection, he would sit a foot away from all of us and if we were to pet him more than once he would get up and walk away.  I just thought that was his personality, some cats are just extremely independent, anti-social creatures and maybe he was one of them.  We notice only after a few months he was having problems with his leg. He would hit the end of his leg on the ground causing sores to develop. He would shake his leg in pain if he were to run too fast or jump from even a short height.  He was never really active and when he was it was short lived due to the pain caused from his leg. After a few vet trips, it was decided by the vet that it was time to amputate the leg.

Fast forward a week later and Claptrap was in surgery, everything had gone well and he was ready to come home the next day. I had of course decided that he would need a lot of help afterwards with adjusting. I bought a lower level litter box, moved his food dish, moved his toys that might cause him to move around a lot and decided to keep Swayze in another room while we brought him home. When he got home, Claptrap wanted nothing to do with any of the new items I had gotten for him, he used his old litter box, jumped up to the area where his food was, he played with his toys/Tibbers and even cuddled with Swayze. He was even walking great for just being out of surgery the day before.

Claptrap healed up great and is now an extremely affection cat, he loves to be center of attention. His favorite activities now include: staring at himself in front of a mirror, cuddling with Swayze, playing with toys with his pal Tibbers, cuddling in our bed with us, running at the speed of light throughout the house and stealing straws out of drinks to play with, which can be annoying!

The differences we see in Claptrap from before and after the surgery are amazing, not only did he prove me wrong with how he’d handle losing a limb but his whole personality changed as well for the better.

Claptraps situation was a bit unique but if you have a cat going in for major surgery and are worried about how they will be afterwards like myself, save yourself a bit of stress and know that cats especially are known for their adaptability skills and will adjust! 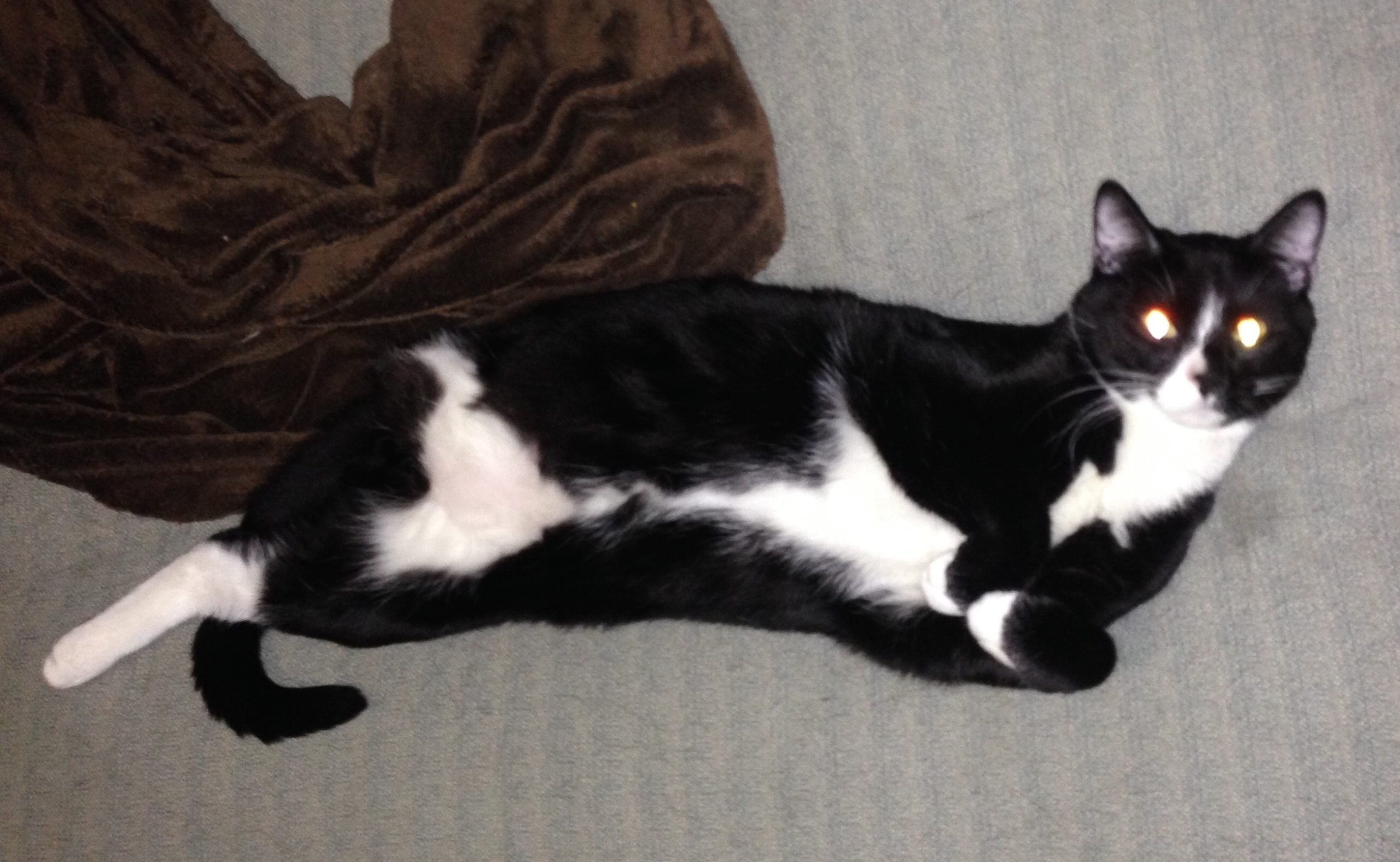