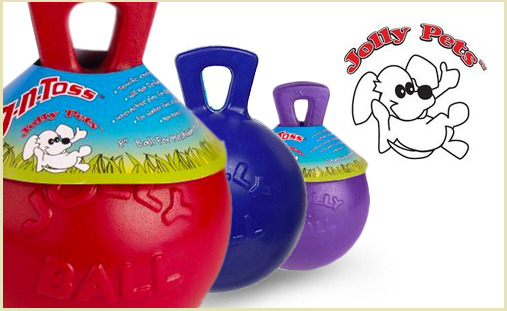 The Indestructible Toy for a Dog Who Destroys Everything

I have two dogs, Ellie a Heeler mix of some sort and Foster a tall gangly mix of what we assume as Great Dane, German Shepherd and Rottweiler. I love my dogs but they destroy everything and anything they can get their mouths on: clothes, slippers, toys, and their favorite, socks. We have bought them an uncountable amount of toys since we first got Ellie but the toys would only last her a day, if that. There would be fabric and stuffing thrown throughout the house and more than once we have had to stop her from ingesting the innards of a toy. We would buy her some of those toys that claim to be “un-rippable ” but less than 30 minutes later the toy was officially torn to bits and no longer safe to play with. Nobody likes having to throw away their dog’s favorite toys so when our co-worker told us about a Jolly Pets Tug-N-Toss Ball we were intrigued. She told us about her dog who would spend hours outside by herself flipping and chasing the ball. This 10 inch ball is made of polyethylene plastic that is virtually impossible to destroy.

The ball does not need any air, so it will not deflate and was originally made for horses so it is extremely difficult to bite through. We ordered one the next day and were excited when it came in and we finally got to see it. The ball is tough but not too hard and it even has a handle on the top, made out of the same material, so the pets can easily grasp it. Our dogs love it. They will play keep away for hours or Foster will just chase it around the yard by himself. They have both sat and chewed on it but the only sign of that are some teeth marks in the plastic, it is still fully intact and safe for them to play with. This ball is probably one of our best purchases because it is big enough for both of them to play with as well a tough and durable. If you have a toy destroying pet I would definitely recommend the Jolly Pets Tug-N-Toss Ball for a toy that will last.